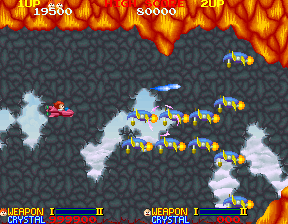 Ordyne (オーダイン Ōdain) is a horizontal scrolling shooter arcade game, which was released by Namco in 1988 only in Japan; it runs on Namco System 2 hardware, and was ported to the Japanese PC Engine in 1989 and the North American TurboGrafx-16 in 1990. It also features a cameo from Pac-Man, as the "Stock bomber shot" - and the arcade version was also included in Namco Museum Volume 4 for the Sony PlayStation, along with another of the company's Japan-exclusive games, Genpei Tōma Den (which was renamed to The Genji and Heike Clans in North America). Tt is officially described by Namco as a "comical action shooter". Miyuki Chan also reappeared in a taco shop in Mach Breakers in 1994. The players must take control of the genius scientist Yūichirō Tomari (泊裕一郎 Tomari Yūichirō) and his Chinese assistant Sunday Chin (サンデー珍 Sandē Chin) as they attempt to rescue Tomari's fiancée, Kana Aibara (相原香奈 Aibara Kana) from the evil Dr. Kubota (Dr. クボタ Dokutā Kubota) and his army of robotic minions; the enemies will all follow preset patterns so as not to make the game confusing for beginners, and killing a group of smaller ones or a larger one will leave crystals behind that can be collected and exchanged for special weapons, extra lives, and even more crystals at the "Kūchū IN" run by the blue-haired woman Miyuki Chan (みゆきちゃん Miyuki Chan) and by firing out marbles at the extendable rotating target of the big white-handed robot Dream Co., Ltd. (夢有限会社 Yūme Yūgengaisha). This game has a total of seven rounds to get through - and a boss must be fought at the end of each one (which will be indicated by a change in music). One hit will kill Yūichirō and Sunday (unless either of them has the "Stock bomber shot", as Pac-Man and the shield he is generating will protect them from death for one non-projectile hit), but they can either earn or buy extra lives. This game also features voice samples (in Japanese).

Ordyne is a horizontal side-scrolling shoot 'em up (also considered a "cute 'em up" due to its lighter tone) that puts players in the role of Yûichirô Tomari, a genius scientist, and Sunday Chin, his faithful assistant. The two heroes must rescue Tomari's fiancee Kana Aibara from the evil Dr. Kubota.

During gameplay, players can obtain crystals that can be used to buy special weapons, extra lives, and other power-ups at shops located throughout the levels. There are also bonus games that allow players to win multiple crystals or points by shooting at rotating targets. Ordyne is two-player simultaneous.